and Aboriginal Elder from Alice Springs who now lives and works in Sydney. Multi-talented, he is also a gifted musician, Aboriginal cultural teacher, public speaker and Aboriginal Cultural performer with a wonderful stage presence.

He is an international award winning “Central Western Desert” painter and his colourful and spellbinding works tell the traditional Dreaming Stories of the world’s oldest living culture.

Walangari’s work has been exhibited extensively both in Australia and internationally. He uses his art as a means of cross-cultural communication and he is dedicated to improving the lot of his people.

Arrernte, of the Central and Western Desert

Born in 1961, Walangari is of the Arrernte, Luritja, Warlpiri, Yankunytjatjara, Pintubi, Anmatjerre and Alyawarre peoples of the Central and Western Desert. 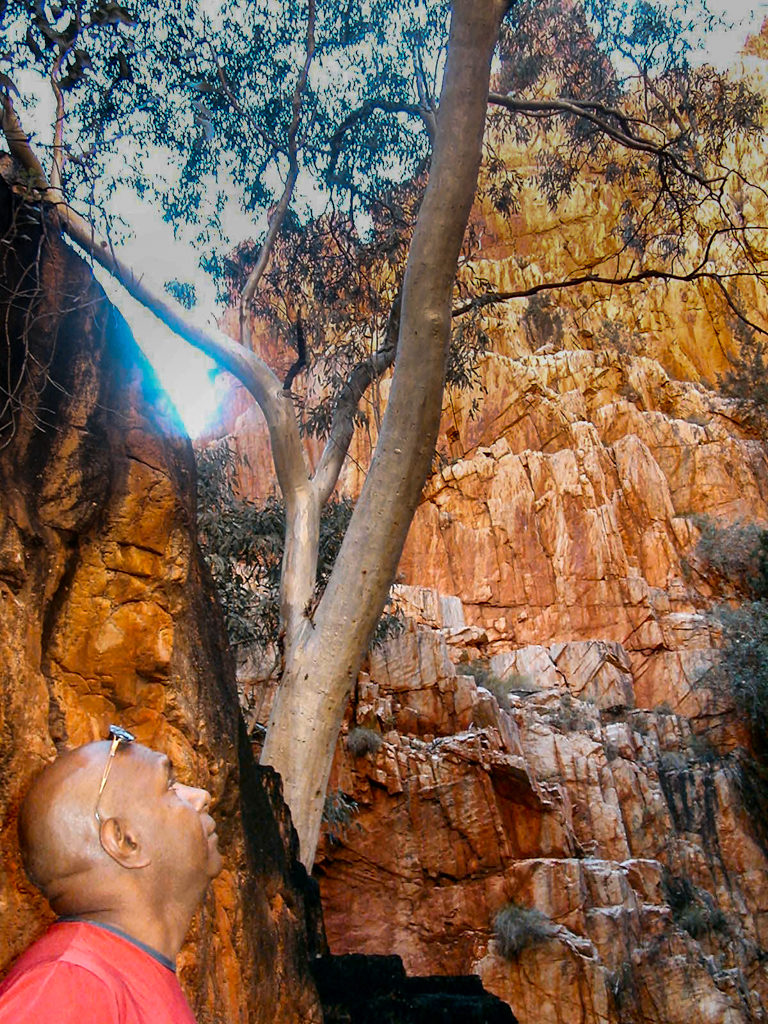 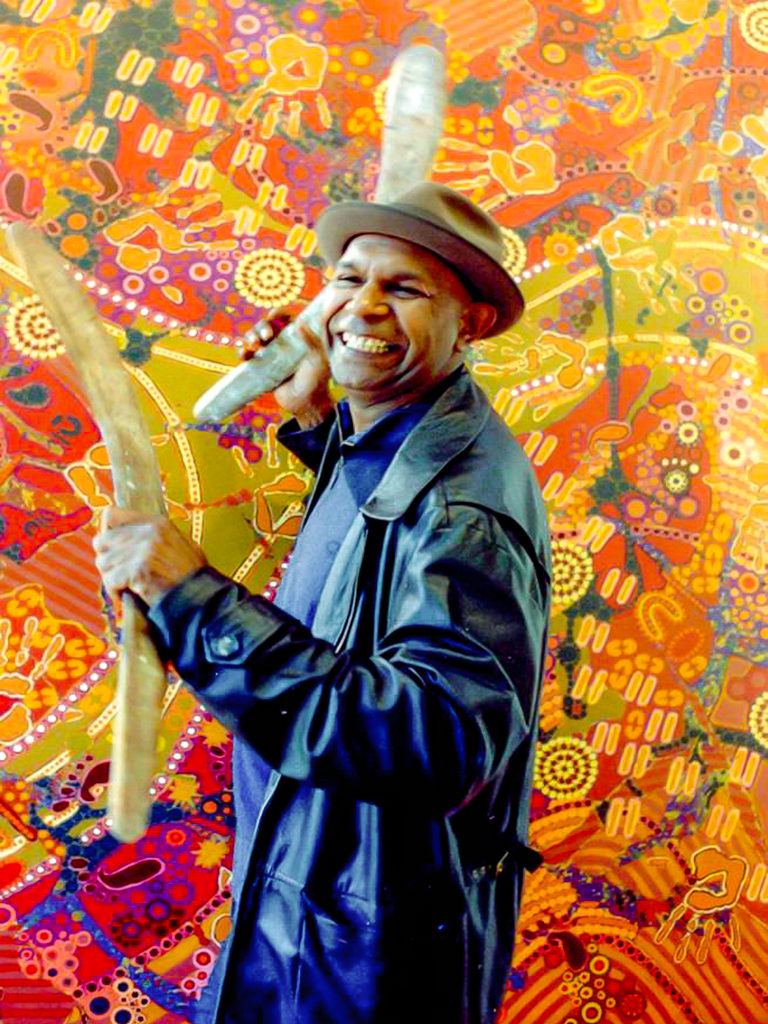 Walangari at the Museum of Sydney with his Art & Boomerangs

His early childhood was spent living a traditional lifestyle in the Australian outback. His direct family line includes the famous Aboriginal Artist and water colourist Albert Namatjira and two of the founding fathers of the Papunya Tula movement, Clifford Possum and Paddy Carroll.

Made a ward of the state at 7 years of age, Walangari went on to gain two university degrees and hold many executive positions and directorships of various Aboriginal Councils. He chaired CAAMA (the Central Australian Aboriginal Media Association), the first Aboriginal owned radio station and was a director of the first Aboriginal television station, Imparja. He is committed to helping ensure that the voice of Aboriginal Australia is heard.

Walangari’s life and paintings have been featured in many television documentaries and publications including the “International Artist” magazine.

The National Gallery of Australia has acquired one of his early works.

While his paintings tell the traditional stories of his people and feature the iconography of the “Western Desert”, Walangari uses a fuller colour spectrum and unique effects to forge a striking path within contemporary Aboriginal Art.

In 1995 he painted the first prize for the inaugural Indigenous Surfing Competition sponsored by Billabong and Coca Cola.

The Australian Museum featured Walangari in the CD ROM that they produced as part of their “Living Colour” exhibition in March 2000.

He was commissioned to paint a work for the Rugby World Cup Paris Exhibition in 2003 and in the same year his work featured in the annual selling exhibition “Art Paris” in the Carrousel du Louvre.

In June 2008 he was awarded the “Green Leaf Award” for artistic excellence in painting by the United Nations Environment Program and the Natural World Museum.

Walangari won the 2010 Deadly Visual Artist of the Year Award. 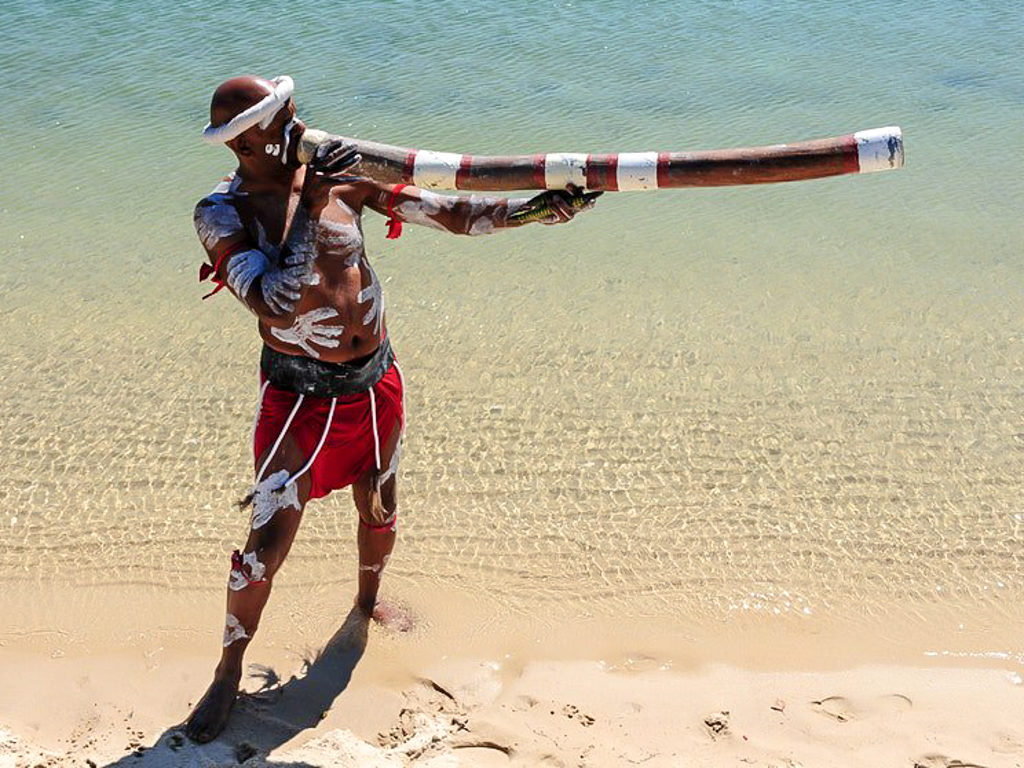 Walangari playing the Didgeridoo on the beach

Learn about Walangari’s creative process and Dreamings by watching this informative video, or browsing his current gallery of Aboriginal Paintings for Sale.